Home Travel Guides Australia Sydney or Melbourne: Where should you go? 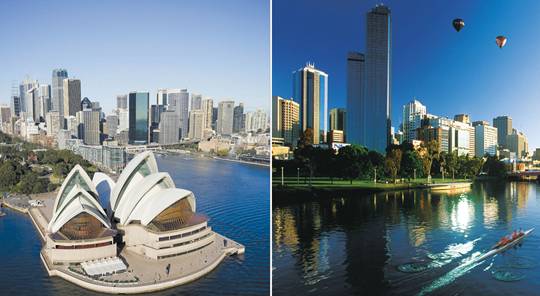 One of the interesting things about travelling around the world is to see the differences and similarities between the countries that you visit.  One of things that you tend to find in most countries is that there will generally be a rivalry of some sort between the two major cities.  The residents of each will loyally point out why their chosen city is far superior and visitors will be forced to make some sort of temporary allegiance how many videos can be downloaded from amazon prime.

In Australia that rivalry is between the cities of Sydney and Melbourne.

In this article we take a look at some of the pros and cons of both cities, trying to give you some guidance as to which is the right city for you if you only have time to visit one monster legends zum herunterladen.

If you want to take some iconic photos that seem to capture the essence of Australia, it is hard to go past Sydney.  It is an incredibly attractive and beautiful city.  Wrapped around Sydney Harbour, you always seem to be within sight of the expanses of blue water.  In contrast, Melbourne has a much more subdued experience.  Melbourne’s prominent feature is the Yarra River that runs through the heart of the city – it’s really not an attractive river though, a murky brown colour that doesn’t look particularly inviting.  Melbourne has retained a lot of its older buildings and from an architectural perspective is probably a little more interesting than Sydney.  But for the place that is going to give you the best postcards, you would have to go with Sydney sms toon iphone downloaden.

When you’re looking at a map of the world Sydney is about an inch closer to the equator than Melbourne so overall it does get warmer weather.  However it does also get a lot more rain than Melbourne.  Melbourne is often criticised for inflicting “four seasons in one day”on its inhabitants, but during summer you do get the benefit of long periods of hot dry weather that seems never-ending.  If you were just judging it on weather, it would probably be a tie for free.

Australians love their food and both cities offer outstanding restaurants that showcase the best of Australian produce and a style that is inventive and often dabbles with unusual fusions of flavours.  Sydney has some really big name restaurants in spectacular settings, but if you look at where the exciting stuff is happening in food right now then you would have to lean towards Melbourne on this one herunterladen.

There is a big commitment to quality coffee across Australia.  Starbucks pulled out of Australia because no one was buying their product.  It seems that everyone you meet in Australia is a coffee connoisseur.  While there will be coffee highs and lows in every city across Australia you would have to say that Melbourne has a stronger coffee culture than Sydney – particularly good are the cafes tucked away in the lane-ways of Melbourne’s city centre bibel download kostenlos deutsch.

While Melbourne does have St Kilda Beach right on its doorstep, Sydney wins this hands down with the famous Bondi Beach, plus other great options such as Coogee Beach, Avalon Beach, and Manly Beach avast herunterladen chip.

From an events perspective, Sydney is perhaps best known for its annual Gay and Lesbian Mardi Gras whereas in Melbourne they are totally sports mad – with the Australian Open Tennis a major international focus, through to the more parochial Australian Rules Football grand final.  This one is probably a tie sicher von youtube downloaden.

Melbourne’s Queen Victoria Markets are one of the biggest fresh produce markets in Australia and it is still very much where people in the city do their day to day shopping kostenlos kinderspiele herunterladen für pc. Plus they have a weekly night market where the food stalls take over and the city’s workers head there for snacks and drinks as they catch up with their friends.  Sydney also has its fair share of markets – check out neighbourhoods like The Rocks, Paddington, or Glebe which all offer regular markets.  Plus the Sydney Fish Market is worth checking out if you get the chance.  On balance Melbourne just wins this one fluidsim 5 pneumatic free german.

When it comes to shopping it depends a little bit what you are looking for.  Melbourne has a strong reputation for independent and boutique stores – particularly in the shops around Fitzroy and Collingwood.  Sydney is more about big brands and flagship stores that let the labels do the talking and leave you gagging on their eleganza. In addition, neighbourhoods such as Surry Hills and Darlinghurst offer some fantastic boutique shopping combined with some outstanding people watching opportunities.  Sydney probably just wins this one.

Both cities have really large Botanic Gardens in the heart of the city – perfect for picnics or as a venue for summer events such as outdoor movies or theatre.  Melbourne’s gardens are bordered by the Yarra River and its trees provide a haven for the multitude of fruit bats that live in the city.  Sydney’s gardens wrap around the harbour and offer some stunning views.  Sydney probably just comes out on top in this category.

While international touring shows or artists will generally make appearances in both Melbourne and Sydney, when it comes to home grown theatre and music then Melbourne probably has the edge.  A thriving live music culture and a vibrant theatre scene means that there always seems to be something interesting going on in Melbourne.  Plus they have the annual Melbourne Comedy Festival which attracts big comedy names from around the world who mix it with the local talent.  Sydney does have some good museums and galleries such as the Powerhouse Museum and the Museum of Sydney but to be honest you’re not booking your holiday to Sydney for a cultural experience.

Sydney and Melbourne are both great cities, so it is difficult to make a choice, but they both give you quite different types of an Australian experience so your choice on where to spend your holidays will really depend on what you are looking for.  What are you waiting for – start planning your trip to Australia now.